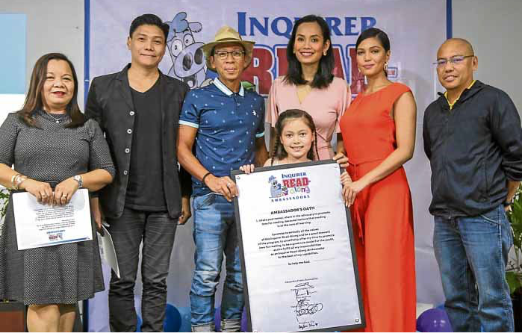 MANILA, Philippines — TV host Kim Atienza is a witness to the power of reading in honing children’s abilities.

A father of three, Atienza said his and his wife’s reading storybooks to their children when they were young made them avid readers.

“Reading is not only about the story of the book. It’s also mental practice that you can apply to other aspects of your personality. It makes you more creative, more patient and more focused, he said.

Also a triathlete, Atienza was part of the latest batch of Inquirer Read-Along ambassadors, along with Inquirer president and CEO Sandy Prieto-Romualdez and TV host Cathy Untalan-Vital.

They were joined by celebrities Patricia Tumulak, Mon Confiado and Angelica Ulip, who were the newest addition to the roster of reading ambassadors.

Led by Inquirer executive editor Joseph Voltaire Contreras, they took the “Ambassadors’ Oath” during the ceremony on Saturday at the Inquirer office in Makati City, an event celebrating the 12th anniversary of Inquirer Read-Along.

The ambassadors “pledged to unselfishly offer their time to promote love for reading and be good role models for the youth.”

Atienza and Untalan, who were among the first batch of “reading ambassadors,” renewed the oath they first took in 2013 when the read-along ambassadors program was launched.

Atienza, who has read in read-along sessions from 2009 to 2015, recalled how reading helped him fully recover months after he suffered a stroke in 2010.

With the block hitting the left frontal lobe of his brain—the part in charge of language, cognition, memory—he couldn’t talk and express himself.

His doctor advised him to read as much as he could to help him recover his faculties.

For Vital, read-along’s guest reader since 2008, the best way to get kids to read is for them to see their parents, their primary role models, reading.

“Before, I used to just teach students and the kids of read-along. But now that I have firsthand experience in teaching my own kids to read, I realize that it’s really not that easy. With the advent of technology, the challenge becomes harder,” she said.

“What I do really is to expose my kids to books and before bedtime I make time to read books to them,” she added.

Tumulak, a TV host and actress, has launched “Push to Read Project,” where she visited children in different barangays all over Metro Manila to teach them how to read.

The project was born out of her desire to be a teacher someday and put up her own preschool.

She has a bachelor of science degree in child development and education.

“Apart from cognitive, phonetic and vocabulary skills, reading can also be a social skill. You can share your book [with] your classmate. You learn a lot. Aside from the story and the lesson itself, the interaction with other people becomes tighter,” Tumulak said.

Confiado, who portrayed President Emilio Aguinaldo in the historical epics “Heneral Luna” and “Goyo: Ang Batang Heneral,” was one of the storytellers during last year’s Inquirer Read-Along three-day festival, which had the theme #MagingMagiting. The experience inspired him to actively promote reading among children.

“What is important to me is not only the reading but also the interaction and connection built with the kids,” Confiado said.

Young actress Ulip is read-along’s youngest ambassador. As a Grade 4 student, she plans to encourage her classmates to read more so they can learn more and have more fun.

Launched in 2007, Inquirer Read-Along is a corporate social responsibility program of the Philippine Daily Inquirer that aims to combat declining readership by promoting love for reading among children. 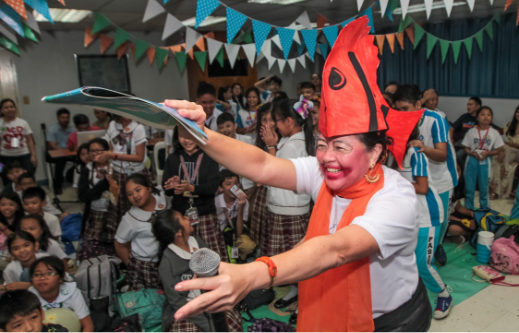 With courage and unity, we can prevail amid trying times and persecution. This was the message of Philippine Daily Inquirer President and CEO Alexandra Prieto-Romualdez to over 150 kids during the first day of the 8th Inquirer Read-Along Festival held at Inquirer office in Makati on Friday morning.